A coastal city located on Croatia’s famous Dalmatia coastline; Dubrovnik is a perennial favourite stopover port on any Mediterranean cruise itinerary. Overlooking the Adriatic Sea, the city was founded as Ragusa during the 7th century. When you visit this UNESCO World Heritage Site, you will walk through the city’s charming city streets, swim along its idyllic beaches, as well as a plethora of other historic sites scattered throughout the city. Then of course, there are the city’s famous orange tiled rooftops, so world-renowned panoramic views are on the cards here as well. Overall, Dubrovnik makes for a great Mediterranean cruise holiday destination that offers something for everyone.

The medieval city of Dubrovnik is one of many firsts, such as being home to one of the world’s first pharmacies, medieval sewage systems, quarantine facilities and orphanages. Also, according to legend the city of Dubrovnik saved the life of a former English king during his return from the Third Crusades when his ship wrecked on Lokrum Island. Another interesting fact about Dubrovnik is that its fortress walls have never been breached, allowing the city to resist Venetian rule. Finally, the city of Dubrovnik is one of the filming locations for popular HBO series, Game of Thrones. Since then, it has become one of Croatia’s most popular tourist destinations. 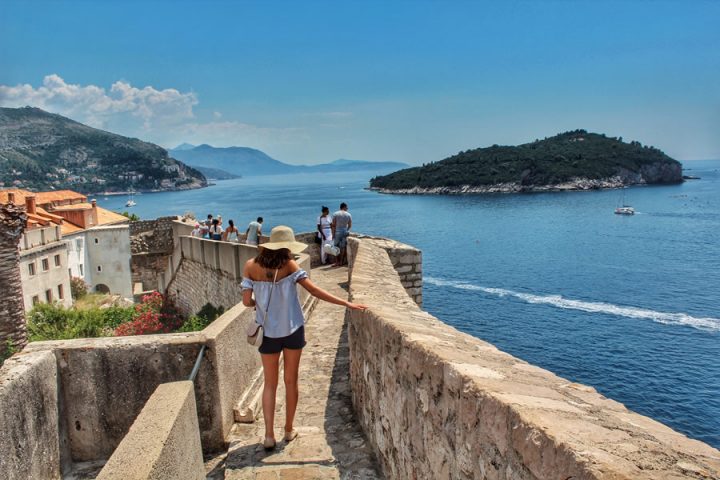 Just about all major cruise ship operators sail to Dubrovnik and offer the destination as part of their cruise holiday itinerary. Thus, there’s plenty of opportunity to visit this Croatian coastal gem. Princess Cruises offer the longest cruises on average, ranging from 11 to 25 nights. Next, Celebrity Cruises has 9- and 11-night itineraries on offer for holiday goers. Azamara Club Cruises offer 10- and 11-night cruises. Finally, Royal Caribbean Cruises offers a 7-day cruise itinerary. 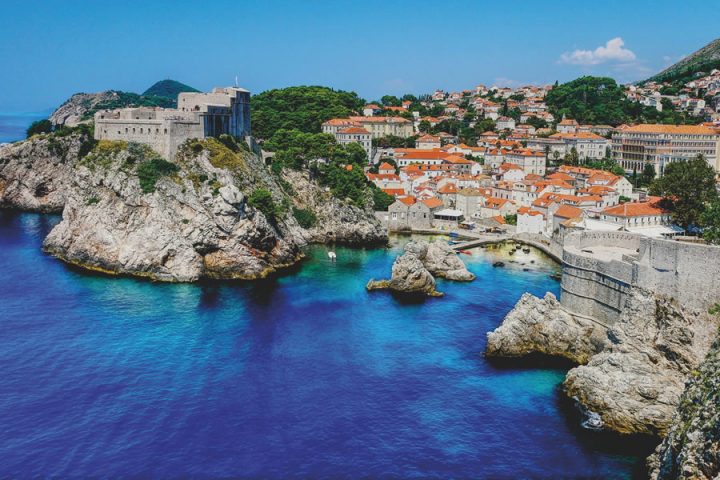 Things to see and do in Dubrovnik

Being one of the more popular cruise destinations in Europe, Dubrovnik offers holiday goers plenty to see and do. We’ve listed some of our favourite attractions below.

Dubvronik’s Old Town and its famous walls represent the major highlight of this Adriatic city. The walls that earned the Old Town its UNESCO World Heritage status were built during the 15th century, immediately after the fall of Constantinople. Touring the city walls will take about an hour, though during your walk you will have the opportunity to view world-class panoramas of Dubrovnik backed by the Adriatic Sea. Within the city walls, you can stroll along the alleys of the city’s Old Town and see the churches, monasteries and other monuments located through the city’s charming streets. 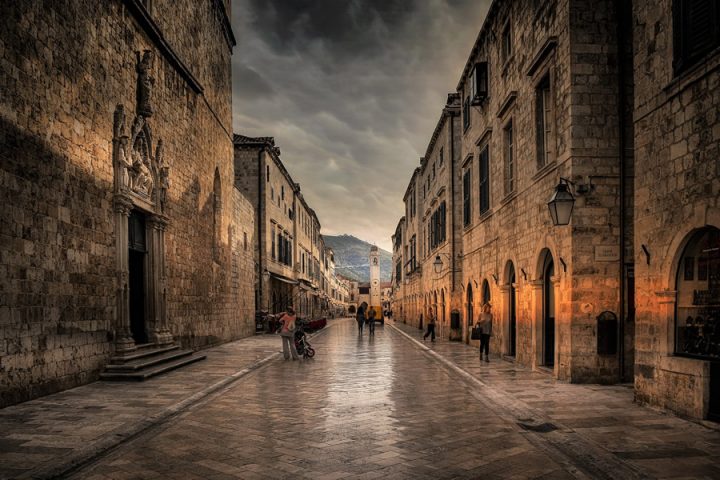 Often referred to as Dubrovnik’s Gibraltar, the St. Lawrence Fortress is one of the highlights of Dubrovnik. Sitting atop a rocky peninsula, the fortress represents a significant part of Dubrovnik’s history, as it helped in the city’s resistance against Venetian rule. In fact, the Venetians attempted to build a fortress of their own on this very spot during the early-11th century. The citizens of Dubrovnik built their fortress before the Venetians though, and thus Dubrovnik didn’t fall under Venetian rule. Lovrijenac fort features a triangle shape layout and has three terraces. The outer walls are 12 metres thick and the fortress can only be accessed by one of two draw bridges.

Situated in the heart of Dubrovnik, the Franciscan Monastery is a must-see attraction if you’re visiting Dubrovnik as part of your cruise holiday. Construction of the fortress begun during the 13th century and hundreds of years. Inside the monastery grounds, you may find a church, library and pharmacy. Some of the monastery’s highlights include the Colonnade of the Cloister, Altar of St. Francis and the interior of the Franciscan Church. Following a devastating 17th century earthquake, the church was reconstructed in the Baroque style and features a single nave. The only original element remaining element of the monastery is the decorated portal overlooking the main street of Dubrovnik.

If you’re a lover of architecture then make the Dubrovnik Cathedral part of your cruise holiday. Perhaps the best example of Baroque architecture in the city, the cathedral dates back to the 7th century, and some items housed inside date back to the 1000s. According to legend, English king Richard the Lion Heart built the cathedral after surviving a shipwreck near the island of Lokrum during his return from the Third Crusade in 1192. The cathedral’s architecture is impressive. Four Corinthian columns flank the portal of the façade and a large Baroque window forms the centrepiece above the entrance. Inside, the cathedral features a large nave flanked by aisles separated by imposing columns either side. There are three apses as well as a grand Baroque dome. 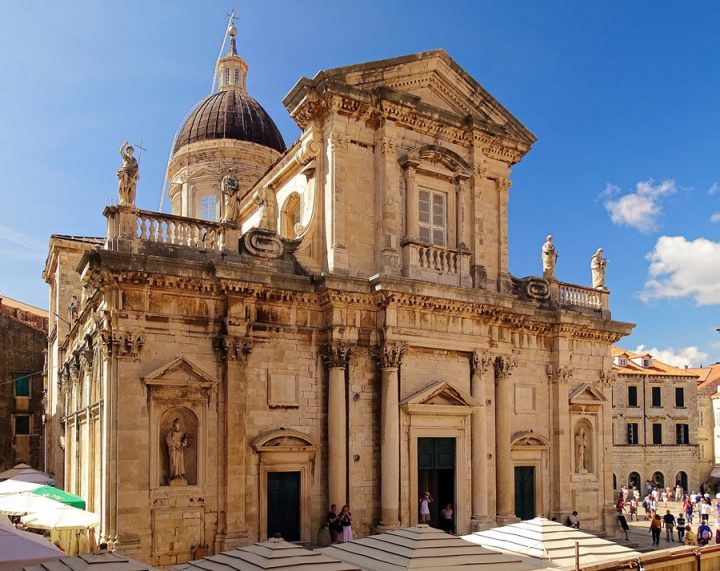 For a swift island getaway, catch a ferry from your cruise ship port and head to Lokrum Island. Within about 10 minutes, you will be located on an oasis of greenery that was once a holiday location belonging to Australia archduke Maximillian. Here you will be able to stroll along the paths that lead through the botanic garden and swim in some hidden rocky coves. The highlights of Lokrum Island include the former Benedictine Monastery, botanic garden, and a small salt lake referred to as the Dead Sea. A popular tourist attraction and diving spot, the lake is believed to have been formed by a collapsed cave.

No Mediterranean cruise holiday is complete without swimming along one of Europe’s fine beaches and Dubrovnik is no exception. There are plenty of beaches scattered throughout the city, including one on Lokrum Island. Our top 3 recommendations are Copacabana Beach, Sveti Jakov and Sulici. Copacabana Beach is widely considered one of the best in Dubrovnik and is a great place to swim on your own or with family. Here you can hire luxury lounges and deckchairs, engage in a range of water sports, including paddle boarding, and even hire inflatables should you be travelling with kids. If you’d rather avoid big crowds though, then head to Sveti Jakov. Another favourite among locals and tourists, Sveti Jakov doesn’t see the big crowds that Copacabana usually does. Finally, Sulici is known as one of the cleanest beaches in Dubrovnik, so it’s hard to ignore. 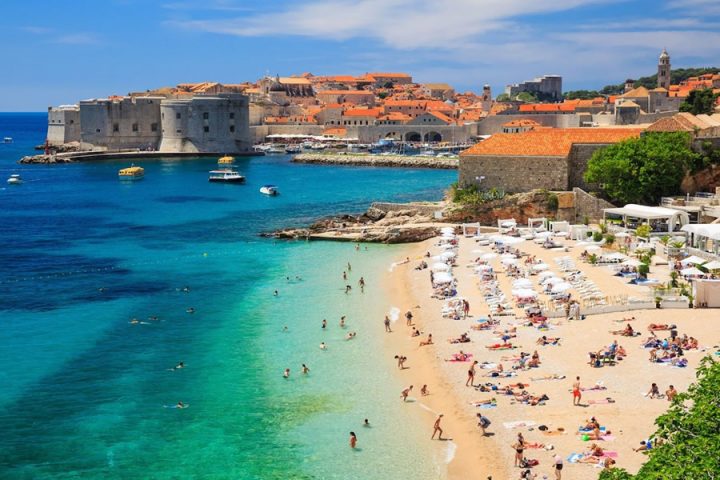